A deeper understanding of Conformal cooling for injection molds

Conformal cooling has become the latest trend in the injection molding industry.   As it compares to traditional gun-drilled cooling lines, it appears to be better, but is that always the case?  We will discuss the comparisons and application of both traditional cooling versus conformal cooling as it applies to heat removal of the polymer/part.

When designing cooling for injection molds, several factors must be understood with regards to the properties of the tool steel such as the type of steel and its corresponding properties i.e.  thermal conductivity, thermal diffusivity, specific heat capacity and density.   Those same properties must be considered for the coolant along with Reynolds number and flow rate.

Thermal conductivity: A measure of a materials ability to conduct heat as shown below:

Thermal diffusivity: The thermal conductivity divided by the density and specific heat capacity (at constant pressure) as shown below:

In order to take advantage of these properties, certain guidelines should be considered such as the spacing between adjacent cooling circuits, thickness or cross section of the circuits and the spacing between cooling circuits and the cavity.  The flow rate must be sufficient enough such that the coolant is turbulent (Reynolds number above 8000) in all regions of the circuits in order to have maximum heat removal.

Gun drilled cooling channels are straight holes cut through the tool steel.  Because these are straight holes, it limits the regions in which holes can be cut such as in any action within the tool or small or difficult regions near the cavity of the tool.  Implements can be used such as heat pipes (thermal pins), bubblers, baffles and small circuits and high heat-transfer materials.  However, there are still regions within the tool that are difficult to implement cooling and these regions are typically accepted.  They can cause issues within the mold such as parts sticking or controlling cycle time.

Gun drilled cooling channels are very adequate when sized and spaced correctly.  Basic guidelines will take advantage of the properties of both the coolant and the cooling channels:

If these simple guidelines are maintained, there will be adequate cooling for the cavity as long as the coolant is turbulent through the channels. 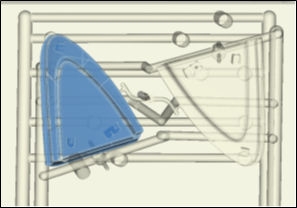 Unfortunately, not every tool design is simple enough for gun drilling to address the cooling needs of the tool.  Therefore, we must also consider the application of conformal cooling.

Conformal cooling can exist as a small circuit routed exactly where coolant is desired such as with an insert for a part shown in the example below: 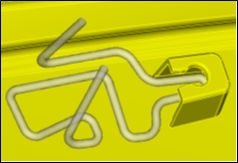 Conformal cooling can also be a fully jacketed cooling circuit encompassing the entire outer surface of the cavity as shown in the example below: 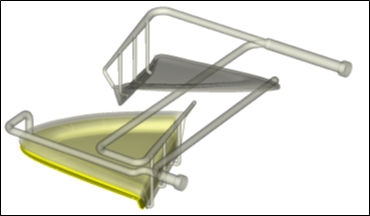 The idea of conformal cooling is simple, however, the design is a more complicated issue.

It is imperative that the design allow for adequate flow ensuring turbulence throughout the coolant jacket and preventing any dead spots.

In the images below the velocity of the coolant is displayed on a color band where blue is a zero velocity and red is a maximum of 50 inches per second.  In this mock-up design, the image shows how the coolant has dead spots (zero velocity) between the entrance locations then disperses from the entrances and slowly increases in velocity across the jacket until it reaches the exit where it reaches maximum velocity again.  This is a great example of how the analysis can reveal the impacts of design on cooling efficiency. 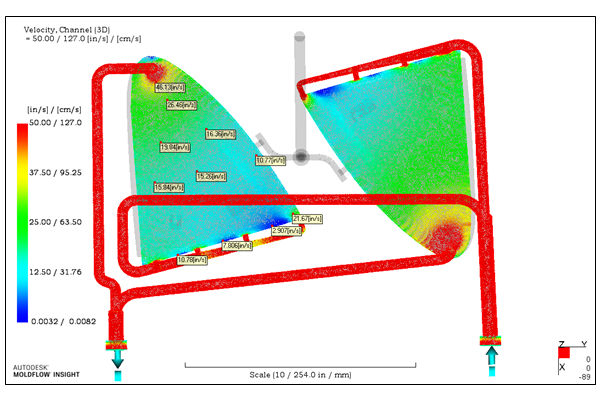 The image below shows the comparison of traditional cooling with conformal cooling and how it relates to the mold surface temperature with the cooling rate of the part. 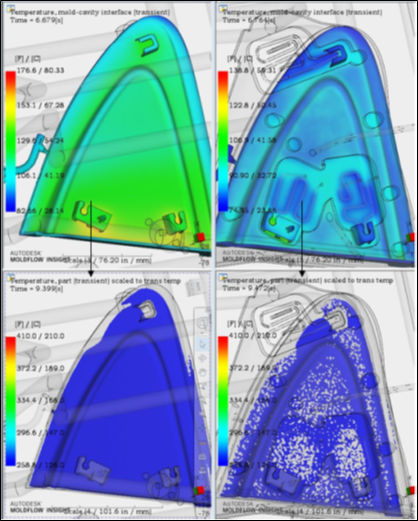 The top row shows the temperature of the tool steel as represented on the part.  The bottom row shows a blue color which is representative of any material with a residual temperature above the transition temperature (ttrans), temperature at which the polymer goes from the molten to the solid state, in this case 258.8F and transparent if it is cooler than the ttrans.

When comparing the bottom residual temperature with the above mold surface temperature at the same point in time within the cycle it can be seen that:

The explanation for this:  The plastic creates a frozen layer on the wall of the mold which becomes a thermal barrier for the molten inner layers and based on the thermal characteristics of the polymer, heat will only leave the polymer as fast as is thermal properties will allow making the polymer the limiting factor with regards to heat removal.

When properly designed, conformal cooling can maximize the cooling efficiency of a tool, but it is critical to understand that the limiting factor is what you are trying to cool.  The thermal properties of the polymer control the cooling rate of the part itself.

The below images show how the part freezes from the mold surface inward to the centerline of the part.

Percent Frozen @ 2.46 seconds into the cycle 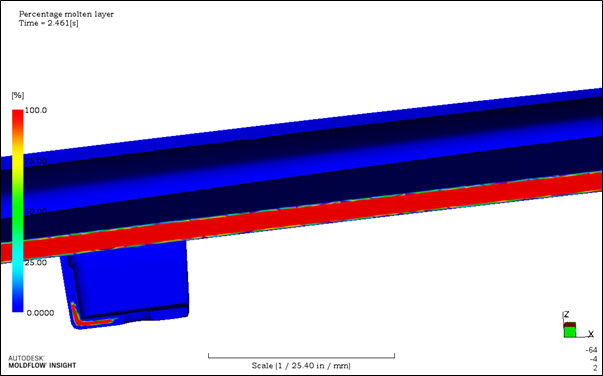 Percent Frozen @ 4.83 seconds into the cycle 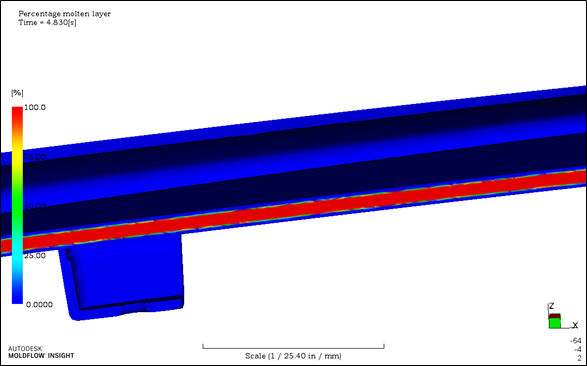 Percent Frozen @ 6.76 seconds into the cycle 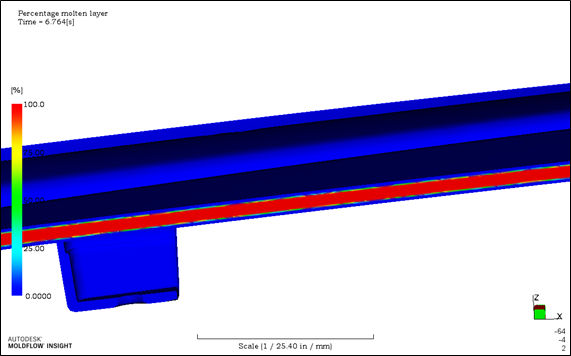 The purpose of these three plots is to provide three data points which illustrate how the rate of cooling of the part is not linear.

NOTE: The percent frozen is an approximation.

At 2.5 seconds into the cycle, the frozen layer of the part is very thin, approximately 5% per side.

At 4.8 seconds into the cycle, about twice as long, the frozen layer of the part is about 15% per side.

At 6.8 seconds into the cycle, about three times as long, the frozen layer is about 20% per side.

When plotting these three points and then extrapolating outward, we can see the trend is non-linear. 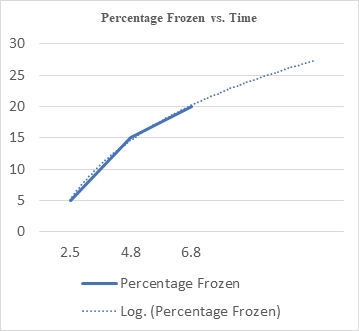 If cooling designs are optimized and the tool steel is cooling at maximum efficiency, the heat removal of the part can only occur as fast as the polymer will release the heat.  It is the controlling factor.

When examining mold surface temperature and comparing it to the cooling rate of the part, we see a slight improvement with regards to cooling design.

However, when we look at the frozen layer fraction of the part in equal increments of time throughout the cycle we find that the trend is not linear.  This tells us that the polymer releases heat into the mold slower than the mold can extract the heat.   The polymer’s thermal properties, thermal conductivity and diffusivity, are critical with regards to heat removal.  In other words, the polymer becomes a thermal barrier and is the limiting factor when it comes to heat removal especially when the part thickness increases.

In summary, when comparing traditional cooling to conformal cooling we can see that there is a slight improvement with regards to heat removal due to tool steel temperatures.  Cycle time advantages can be estimated at roughly a 5-10% savings which can be significant.  However, this is only true if the part is relatively thin and has a nominal wall thickness.  Thinner parts will remove heat more readily therefore the cooling system must be more effective to accommodate this.  The thicker the part becomes the more difficult it becomes for the heat to exit the center of the part to the mold surfaces and thicker parts will control heat removal time. It is extremely important that part thickness remain as uniform as possible in order to control heat removal.

Complex parts with regions that hold heat such as deep recesses, corners, dog-houses, clip towers etc. will require cooling circuits which can be routed in these difficult locations and remove the heat.  Uniform heat removal will result in uniform stress within the part and less part deflection thus resulting in a better quality part. 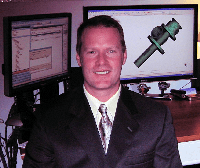 Chris Czeczuga is a Plastics Engineer and the President of Bozilla Corporation. He has proven success with many Fortune 500 companies throughout industry.  A graduate from UMass Lowell, he is Expert Certified with Autodesk, has 20+ years of field experience, intimate knowledge of injection molding part design, and tool and feed system design. Bozilla Corporation’s success is built on providing the highest level of simulation and consulting advice to businesses who have short lead times, require an efficient molding process and desire to produce a correct part the first time.